Pattaya is the second most visited city in Thailand after Bangkok. Unlike the latter, it has beaches and a much more relaxed atmosphere—during the day. At night, shit gets crazy. Pattaya to me felt like South Beach in the United States combined with the From Dusk Till Dawn movie, except that the night walkers here won’t suck your blood.

During the day, it is a city where people go to the beach, temples, the water park, go-kart racing, tiger or elephant sanctuaries, the zoo, play golf, relax with a famous Thai massage, or enjoy a free seasonal festival that runs into the night. But more often than not, people use the day to get over their hangover, sleep off the party that ended well into the morning, or relax in anticipation of the evening. 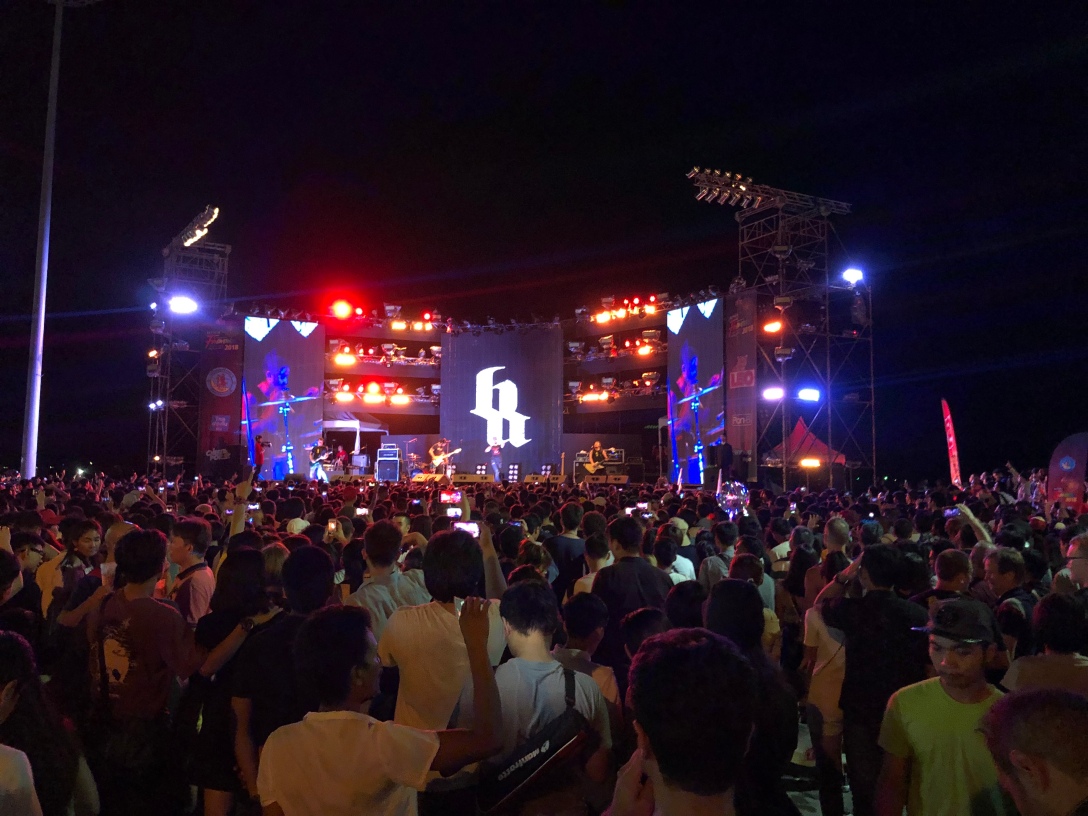 Fireworks and Concert Festival 2018 featuring Big Ass…that’s the name of the band…Big Ass.

I was slightly disappointed with the food. It wasn’t bad, but I thought there were just too many Western choices. The Thai food is so good that it’s baffling why anyone would come to Thailand to have Pizza Hut. There were countless Italian restaurants (no, I’m not counting Pizza Hut as one) and Indian restaurants. Still, it was better to just have street food from a motorized cart! It’s a motorcycle that has a cart attached to it from the side and is driven around to busier areas. These probably aren’t sanitary.  The food isn’t covered so it collects whatever it is in the air. Whatever, that shit was good! My favorite was a chicken leg in Walking Street, in front of the awesome club/bar/lounge 808.

Walking Street is where everything is for party time. Well, not everything but where you’ll spend most if not all of your evenings. It is a long strip with bars, clubs, lounges, go-go bars, beer bars, massage parlors, restaurants, street food, mini markets, hotels, VR kiosks, barber shops, beauty salons, ping pong shows, and even a freaking Muay Thai fighting ring. Given the amount of activities in the street, I was pleasantly surprised as to how clean the street was. I saw a man throw a cigarette butt on the street, and the cops called him over. The man tried to apologize, but the cop said, “No ‘I’m sorry’. Come with me.” He had to pick it up and received a fine. Plot twist: it was a foreigner.

Despite Pattaya’s reputation, I was initially surprised by the amount of couples and families visiting the city. Much the same feeling I got in Amsterdam when I noticed the same. At first I couldn’t understand why they would come here. I mean, Pattaya is literally the biggest Red Light District in the world. But after I went to a club on my first night with two guys I met from Brooklyn, I knew why. I wouldn’t have gone otherwise as I’m not a club person. My best dance move is what I call “The Bamboo.” It is where I just stand still because if I move, I would break in half. 🙂 I’m glad I went because in that club/lounge I witnessed something cool, which I have never seen before. People having fun with other people regardless of color, gender, sexual orientation, background, or whatever. All in the same place. No cliques. It didn’t matter if you were Indian, Arab, Asian, white, black, old, young, short, tall, fat, gay, lesbian, ladyboy, or straight. I mean, there was even a little person shaking her ass proudly in the middle of the stage! Everyone shared drinks, toasted, and danced with each other. I can’t even say people were accepting of each other because that implies there’s something to be accepting of. It wasn’t like that. People just were. Everyone just wanted to have a good time. It was cool to see this scene especially when I had recently read the fuss over a bakery refusing to make a ‘gay cake’ in the US. I don’t know what it was about Pattaya that provides this ‘free’ environment that allows people not just to be accepting or tolerant, but to just be. I’ve always praised NYC for the melting pot of cultures that it is, but Pattaya is another level. To be clear, I’m not praising the establishment to foster this vibe, as it is in the business’s best interest to sell to as many people as possible. But it was in that club that I realized what is happening all around Pattaya. It was just much easier to see it in an enclosed environment. So that explains the couples…families being here is still beyond me. I saw a bunch of families exiting Walking Street and kids with a “WTF did I just see” face. I’m pretty sure they’re traumatized now.

Alright, I guess I should talk about the elephant in the room. Pattaya has a large amount of sex workers. According to some estimates that I read, it has more than 27,000. Without exaggeration, anywhere you walk within the city center, there will be random women, men, and ladyboys of all colors, shapes, ages and sizes. They’re everywhere. Still, I never found them annoying as I did in Bangkok. Maybe it’s the beach vibe that keeps everyone chill. Although they do solicit you similarly like in the capital (standing in front of you and grabbing your hand), they’re not as persistent. So they will try, but when they see you’re not interested, they back off before you get annoyed.

Now, the one thing I said yes to…was the Ping Pong Show. Most people find it disgusting and something they’d never repeat. But it’s still something that one must do when in Thailand. I didn’t find it disgusting but no part of it arousing either. I found it impressive. I had no idea vaginas could do the things I saw a vagina do in the ping pong show. Unfortunately, I came in while the show was already on its way so I missed the beginning. I think I missed the part where the titular act is performed as I didn’t actually see any ping pong balls being launched from any lady-parts. Now, what I did see was a woman smoking two cigarettes at the same time; another take in water from a bottle, walk around (with the emptied bottle in her hand), and then something that looked like Coca-Cola spill out back into the bottle; and seeing a baby cucumber being ejected from the stage all the way out into the audience (I find this more impressive than a ping pong ball given the mass of a cucumber). But they do magic too: they take out a bunch of razor blades on a string much like magicians take them out of their mouths. To prove that they’re sharp, they randomly select razors and cut a chopstick into pieces. But the highlight was when the guy next to me was given a balloon to hold up high, right from where we were seated. Then the girl on stage puts what looks like a straw in her vagina, aims, and POP! Balloon is gone. I reacted exactly like someone that’s never seen a vagina blow a dart across a room with precise aim and take a balloon out of existence: With nervous laughter and giggles. 🙂

Still, although Pattaya has plenty of daytime activities (even for children), a lot of the fun is for adults. I can’t recommend families come here. All those daytime activities exist elsewhere in Thailand without the thousands of sex workers around. For singles and couples, absolutely. It is a party city with an amazing vibe that should be experienced. Now, I need to see the rest of the Ping Pong Show. 😉