I’d like to begin with a little lesson as I wasn’t too clear on this myself until coming to Japan.

Sushi is anything that has cooked rice seasoned with vinegar, salt and sugar. Sushi literally means vinegar (Su) and rice [dish] (Meshi). This means that sushi does not necessarily have raw fish. It can have egg, beef, vegetables or whatever.

Maki is a sushi roll wrapped in nori (dried seaweed) on the outside.

Uramaki is inside-out maki. This was created by sushi chefs in America. They often saw guests removing the nori and wanted to cater to their taste. So, they inverted the traditional maki to have the nori on the inside so as to not be visible to guests. This type of sushi is what most Americans think of when they think of sushi.

Sashimi is sliced meat. Just the meat. Sashimi also doesn’t have to be raw fish. It can be eel, egg, cooked shrimp, etc. Sashimi is not a type of sushi as it lacks the rice!

Nigirizushi is simply Sashimi on top of rice. Nigirizushi is a type of sushi and it’s often referred to (incorrectly) by many as Nigiri. But as long as it’s spoken or written within a sushi restaurant or context, everyone will know you mean Nigirizushi if you say Nigiri. This is what most Japanese restaurants focus on serving as it allows them to showcase the qualities of their fish and the chef’s knife skills as well as their rice making skills.

Tuna Nigirizushi. The most popular sushi of them all

Gunkan Maki is another variation of the maki roll. This roll has the rice molded into an oval shape and wrapped with nori, leaving space for toppings. This is the preferred method for delivering soft deliciousness, like salmon roe and uni (sea urchin). 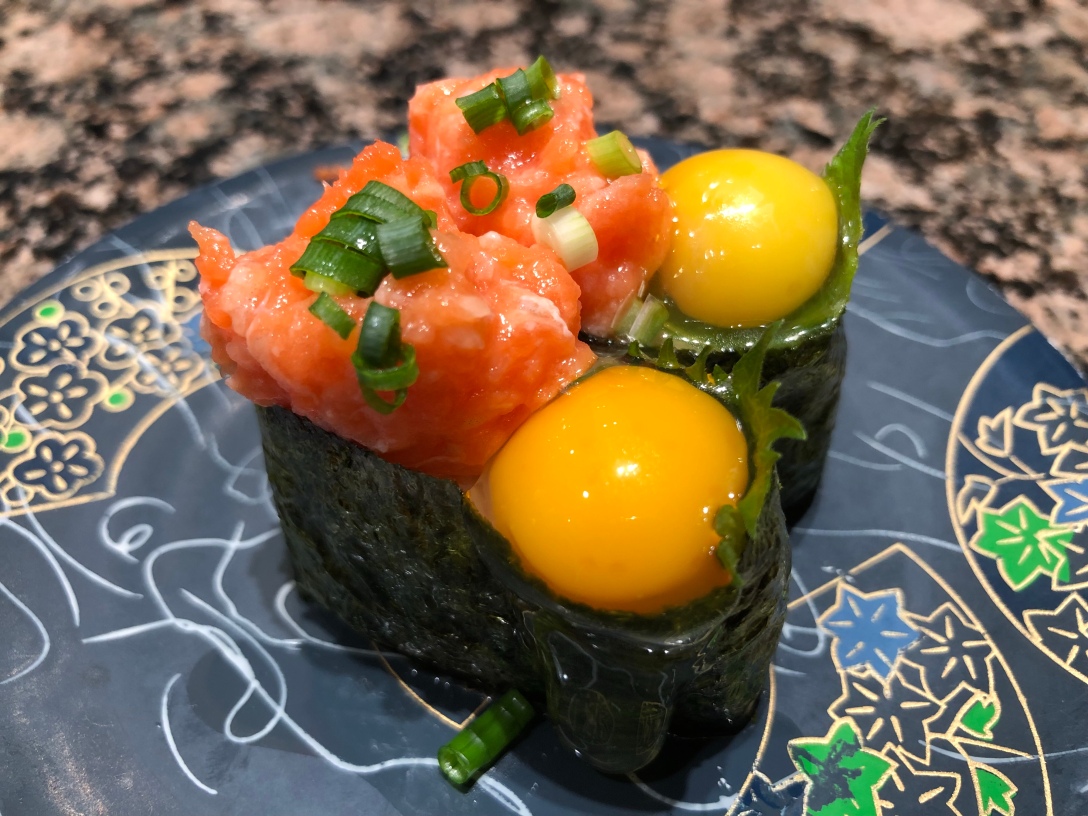 Before coming to Japan, I thought its sushi must be amazing, as it would be the highest quality and the freshest possible fish. The time from the fish being caught to the sushi counter can be literally the same day. While the expectations for high-quality fish were absolutely met, even in medium to low-end restaurants, the freshest fish is not always served in high end restaurants.

Beef connoisseurs know that aged beef—when done properly—is better than fresh beef. It’s more flavorful and more tender. Similarly with fish, the high-end sushi places will swear by their own technique of aging the fish. They will have different methods and different time to age different kinds of fish. This is done in an effort to extract the best flavor of each fish.

The other part which chefs devout an immense amount of care and detail is for the rice. Because a lot of places have the same quality of fish, the rice is the major component that every establishment uses to differentiate themselves from the competition. It’s all about what kind of vinegar to use as well as carefully chosen amounts of salt and sugar.

fish being so great, why ruin it with a ton of distractions?

Although I did detect differences in seaweed used in makis across restaurants, I don’t think they’re as important since the main morsel of yumminess eaten in Japan is the Nigirizushi. This is the star of the show in any sushi restaurant. In all of the sushi restaurants I visited in Tokyo, they all had, maybe 2-3 different maki rolls of sushi at most and all were on the last page of the menu, as if it were an afterthought or something added simply because they “had to”. In contrast, restaurants will have anywhere from 20-100 different pieces of Nigirizushi. Also, none of the rolls had the creative concoctions the states serves in even the most basic of sushi restaurants. The fish being so great, why ruin it with a ton of distractions?

I also noted how the Japanese eat their sushi. The most commonly used technique is dipping only the front end of the bottom corner of the sushi on a very shallow amount of soy sauce. Ginger was not mounted on top and many don’t even have wasabi added. Ginger is used more as a palette cleanser and wasabi only served when requested. But I think this is mostly because all places I saw making sushi added wasabi by default between the rice and the sashimi to behave as the glue that keeps sushi together.

using that coated piece of ginger as a soy sauce paintbrush

Another common way to eat the sushi, was to apply the soy sauce only on top, without touching the rice. This can be done, a number of ways: 1) flipping the sushi piece upside down in order to only coat the fish with soy sauce and flipping it back so that the rice touches your tongue with its intended flavor; 2) stripping off the fish from the rice and coating it before mounting it back on the rice. This is a very sloppy technique and I only witnessed it when option 1 would fail; 3) what I call “the fancy” way, which is taking a large piece of ginger, soaking it with soy sauce and then using that coated piece of ginger as a soy sauce paintbrush with your chopsticks. This is not common in restaurants as it is not as practical as option 1, but it is now the technique I use. I found it to be a perfect way to appreciate the subtlety in the flavor of the rice by allowing it to make direct, unadulterated contact with my tongue, but still enjoy the added saltiness of the soy sauce when experiencing Nigirizushi. 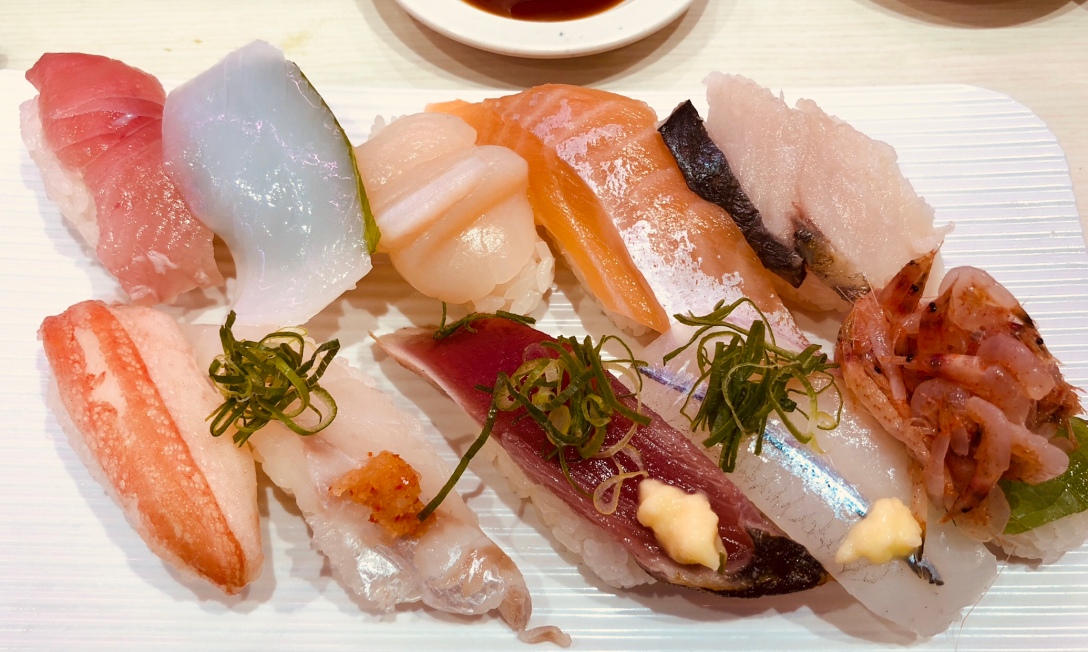 If you look up articles of sushi restaurants in Tokyo, a lot of them will say: you can’t have bad sushi. The worst sushi I had here is still better than many of the places outside of Japan, so I have to agree with the articles. I didn’t visit a high-end sushi restaurant as they can actually be quite tricky to make reservations. They get booked far in advance and most have to be done through the phone in Japanese. Moreover, many sushi places don’t have English speaking chefs, which means you’re missing out on a big part of the sushi experience in japan: the chef.

If I look back, a lot of the sushi I ate blends together in my mind and it’s easy for me to forget where I ate what. It’s all so good it’s hard for any piece of sushi to really stand out. But one thing I remember clearly, is which chef I like more than others. The mannerisms, the way they take the order and repeat it back, how they speak with their guests. It is no surprise that the longest wait in any restaurant is for the counter and most restaurants, especially mid to high-end, only have counter seats. They’re not just selling seats for sushi, they’re selling an experience. 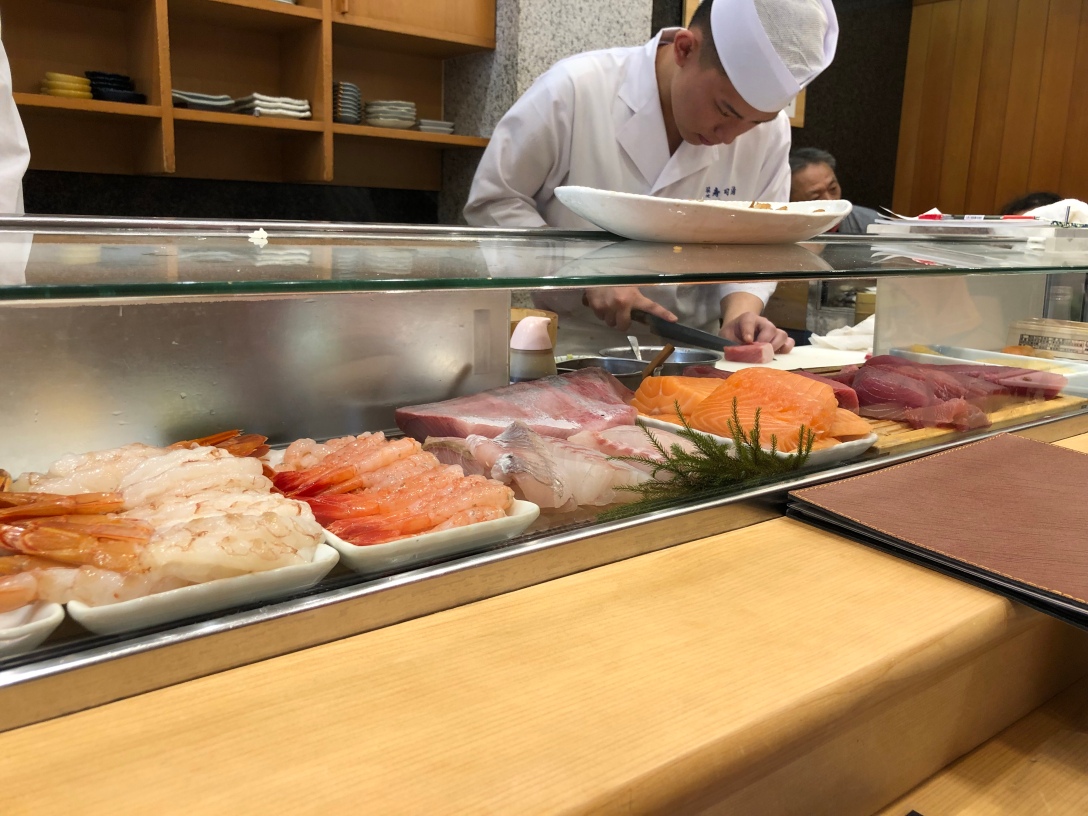 There are so many places I wanted to visit, but time was short, I only had 14 days in Tokyo! 🙂 However, I’m very happy for the places I went to. My diet for those 14 days consisted exclusively of sushi and ramen. Well, except for those two times I took a break to eat Kobe beef. 🙂 It’s crazy to think I’m not tired of eating sushi or ramen and I still crave more. It’s a good thing I’m not leaving Japan just yet!